A DOOMED CHURCHYARD IN BIRKENHEAD


A DOOMED CHURCHYARD IN BIRKENHEAD Beyond the precincts of St. Mary's Church in Birkenhead, Cheshire, rise the cranes and sheds of Cammell Laird, the shipbuilders. In the centre background can be seen the prow of a ship taking shape. The churchyard has been bought by Cammell Laird for the construction of a new dry-dock.
A churchyard in Cheshire is to suffer the unusual fate of transformation into a dry-dock. St. Mary's is a parish church in Birkenhead, on the Wirral Peninsula opposite Liverpool. Just beyond the precincts lie the workshops, docks and cranes of the busy shipyards of Cammell Laird. The site of the church has been a place of worship for hundreds of years and about 1,900 people have been buried in the churchyard since 1719. The area involved is 3,100 square yards, about two-thirds of the churchyard. This land has been acquired from the church authorities for Cammell Laird under a compulsory purchase order of the Birkenhead Corporation, for the construction of a dry-dock which will be able to accommodate some of the biggest oil tankers afloat. Workmen wearing special clothing and supervised by medical and ecclesiastical officials will undertake the task of disinterring and removing the remains of the buried dead. These will be reinterred in a neighboring cemetery. St. Mary's Church was consecrated in 1821, but the grounds contain the ruins of a priory which was founded in the middle of the twelfth century by Benedictine monks. This foundation survived 400 years, to be dissolved by Henry VIII at the Reformation. The ruins will not be displaced in the construction of the shipyard.
Posted by Colin D Gronow at 3:30 AM No comments:

Labels: A DOOMED CHURCHYARD IN BIRKENHEAD

This church, of which the late Rev. Canon Knox was incumbent for upwards of half a century, will be reopened to-morrow (Sunday), after important alterations and complete restoration. The Mayor of Birkenhead (Mr. William Laird), accompanied by the members of the Town Council, will attend in his official capacity, and sermons will be preached both morning and evening by the Bishop of Sodor and Man.
In carrying out the alterations, the intention has been to restore the church as far as possible to the form originally intended by the architect, the late Mr. Rickman; and at the same time to increase the comfort of the congregation, render the church in every way suitable for divine worship, and place the parish church of Saint Mary in the position it ought to occupy as the oldest ad most important church in the borough. Before describing the character of the alterations, it may be interesting to give a brief account of the appearance of the church before the work was commenced. There were three large galleries, occupying the whole of the north and south transepts and the west end of the church. These much interfered with the comfort of the congregation sitting beneath, and, reaching nearly up to the ceiling, the back seats were most incommodious. There was no centre isle, and all view of the communion table was blocked up by the lofty old-fashioned “three-decker” arrangement standing in the centre of the church. The pews were old-fashioned, high, and proportionately uncomfortable. The organ stood in the western gallery, and as it almost touched the ceiling much of the sound was lost. The mode of warming the church was very inefficient, and had to be supplemented by a large stove, the flue from which was doing much mischief. The church was badly lighted, and there was no proper system of ventilation or drainage. In consequence of the want of the latter, much of the flooring had become rotten and dangerous from the rain-water which was allowed to percolate to the foundations. It is stated in “Gore's Directory” that the church had seat room for 15,000. This calculation would only give at the utmost a space of 18 inches for each person, being considerably less than the proper amount; indeed, if the church did really hold that number, it must have been at a very considerable sacrifice of comfort, particularly on Sunday evenings, when the gas was lighted. The church as originally designed by the architect had no galleries in the transepts, and these were subsequently added in consequence of the rapid increase of the parish. Assuming that the church as originally designed would accommodate about 1000, it is manifest that to increase that number by 500 without any addition to the size of the church could only be effected by a diminution of the cubical contents of air allowed for each person. The following is a brief description of the most important alterations that have been made:- The height of the church has been increased by lowering the floor 15 inches, it being found impracticable to alter the height of the ceiling. The whole of the galleries to the north and south transepts have been removed. The space occupied by the staircases and vestibules has been added to the area of the church; the front of the western gallery has been set back 2ft., the organ removed to a new organ chamber built on the north side of the chancel, and the seats entirely rearranged. All the pews have been reconstructed, so as to give greater comfort to the congregation. A centre aisle has been formed, and the pulpit re-erected at the north-east corner of the chancel. By this arrangement the preacher is in full view of every seat in the church. The chancel has been raised 18in. above the floor of the church, with stalls for the clergy and choir. Vestries for clergy and choir have been built on the south side of the chancel, and on the north side an organ chamber, with heating vault underneath, the church being thoroughly warmed by hot air. The lighting is done partly by four Siemens' patent regenerative gas burners, supplemented by gas brackets, and the ventilation has been considerably improved. The passages and aisles are laid with Wharain's patent wood block flooring; the chancel and baptistery (late vestry) being laid with ornamental encaustic tile paving; the apse with mosaic tile pavement, the latter being chiefly made in Liverpool. The windows in the apse and baptistery are filled with stained glass of an ornamental character. The screen between chancel and vestry and new windows being also fitted with lead lights. The main contract for the alterations has been carried out by Mesars. E. Legge, Son, and Co., of Birkenhead; the tiling and mosaic by Mr. Leadly Brown, of Liverpool; the stained glass by Mesars, Campbell, Smith and Campbell, of London; the ornamental glass by Mesars, Forrest and Son, of Liverpool; the whole being carried out under the superintendence of Mesars, Aldridge and Deacon, architects, Liverpool. The necessary funds were partly raised by subscription, supplemented by the munificent liberality of Mr. W. Laird, the mayor of Birkenhead, and the Laird family. In addition to the foregoing works, extensive repairs are being done to the structure, and considerable alterations are proposed to be made in the graveyard in order to render the same more attractive and rescue it from its present neglected condition, for which funds are much needed.
Posted by Colin D Gronow at 3:36 AM 1 comment:


This interesting photograph of the interior of St. Mary's Church comes from Zillah Beaumont in Greece, whose father and uncle were in the original Birkenhead Male Voice Choir.  The picture above shows Charles Scarratt rehearsing the choir during their lunch break in St Mary's Church, Birkenhead.

My thanks to David Horton of the Birkenhead Choral Society:  http://www.birkenheadchoral.org  in the reproduction of this photo.
Posted by Colin D Gronow at 1:49 AM 2 comments:

Birkenhead Petty Sessions
Monday (Before Messrs. R. Bryans and B. Darbyshire.)
Drunk in a Churchyard.- Peter Fylan, a furniture Broker, was charged with having been drunk and disorderly. Police-constable 1 (Kehoe) said at twenty minutes past six o'clock on Sunday night his attention was directed to the prisoner, who was in St. Mary's Churchyard. Witness, on going into the churchyard, found the prisoner in an almost naked state, lying between the grave stones. The people were going to church at the time, and after they had gone in he took the prisoner to bridewell. - The prisoner said he had been thirty years in Birkenhead, and never did anything in his life except through drink. He promised both of the magistrates and "the gentlemen of the jury" if the case was looked over he would never get drunk again. He hoped their worships would live to see him sober.- He was fined 5shillings and costs.

(reported in the "Cheshire Observer" on Saturday 23rd September 1865).

According to the Census Peter Fylan was born in Ireland in abt 1821, in the 1861 Census he was living at 22 Eldon Street Birkenhead.
There is a Death registration for a Peter Fylan in Birkenhead in the Dec. Qtr. of 1869, but the age given is 61.
Posted by Colin D Gronow at 4:45 AM No comments:

The Association Of Graveyard Rabbits 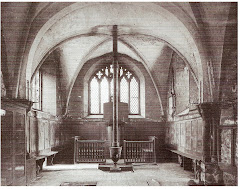